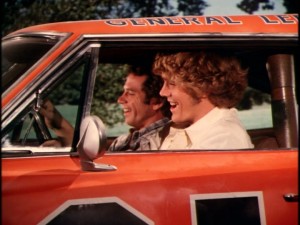 The Dukes of Hazzard airs on CMT whenever the heck CMT feels like it.  Find episodes and air times by visiting the Dukes page on CMT.com, the schedule is on the left side column. It changes often, so keep an eye on it!

Meanwhile, there are Dukes of Hazzard cast appearances coming up! Check ’em out:

March 31 through April 5, 2015: Rick Hurst, “Deputy Cletus Hogg” will be at Cooter’s Place in Gatlinburg, TN. Gitcher mugshot taken with one of Hazzard County’s finest!

Is it really 2015, with all the Dukes stuff going on? Somebody pinch us! (not there! Yowch!) Where were we…oh yeah! MORE:

July 23 through July 27, 2015: Deputy Dipstick himself, Sonny Shroyer, (Enos)  will be at Cooter’s Place in Gatlinburg. Sonny is a great guy. You need to meet him.

August 7 through 9, 2015: Good ol’ boys John Schneider and Tom Wopat will be at the Fandomfest Comic Expo in Louisville, KY! Located at the Kentucky International Convention Center. This is always a fun bash, and having the Duke boys there will make it even better!

There’s actually more Dukes news where this came from, but we need to save something for the next post! Otherwise we get lazy. Meanwhile, amuse yourself at our popular facebook page, Dukes of Hazzard County! 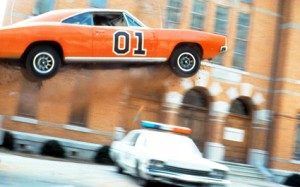 Since CMT likes to play hide-and-seek with their airtime schedule (now you see it, now you don’t!) we’re gonna copy and paste it right here:

The Dukes of Hazzard on CMT

You’ll notice it says “ET/PT” as if Eastern and Pacific time zones have the same broadcast time. We can only assume this is a typo, but don’t take our word for it. Also, Dukes of Hazzard airtimes on January 10 have fun variety such as 7:37 p.m. and 8:44 p.m. and 9:52 p.m. They’re just screwing with us to see if we’re paying attention. We are! It doesn’t help.

The only other way to watch Dukes of Hazzard is to own the DVD series for yourself, which is available through Amazon. You can also stream your favorite Dukes episodes on Amazon for a mere $1.99 each. 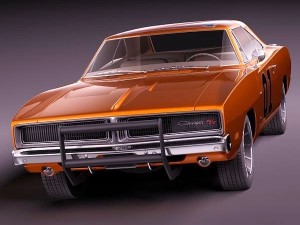 Dukes of Hazzard News: A Dukes of Hazzard marathon is scheduled on CMT for Friday, December 12, beginning at noon eastern time! No one is more surprised than us, since we finally thought we knew what the heck was going on.

Seven Dukes episodes will be airing back-to-back! Here’s the rundown, in order:

To give you some idea how fast the CMT schedule can change, and how random it is, look no further than our prior post! While we do our best to keep up with airtimes for The Dukes of Hazzard, CMT’s schedules are always subject to change. Don’t shoot the messenger if the Dukes aren’t on TV when you expect, or they’re on TV when you didn’t expect. We’re the only website that attempts to report it anymore. Have pity.

Be sure to Like our Facebook page for updates and daily fun with the Dukes of Hazzard! 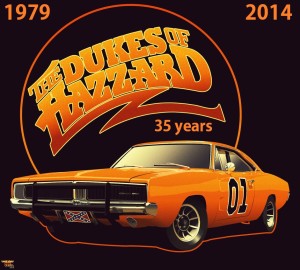 The last time CMT aired a Dukes of Hazzard episode was November 17th. According to the CMT schedule at that time, the Dukes were only supposed to be off the air through Thanksgiving Day.

However, CMT changed their tune and their schedule without warning, leaving fans in a lurch.

It now appears that The Dukes of Hazzard will return to CMT on December 8th, 2014. Here’s a quick rundown of upcoming episodes!

Monday, December 8th at 1 PM Eastern: “Boss Behind Bars”: Jesse Duke has a wreck during a race due to sabotage, and Boss Hogg is framed as the culprit.

Monday, December 15th at 12 PM Eastern: “Enos’s Last Chance“: A mob hitman who was captured by Enos escapes from prison, and comes to Hazzard County to collect revenge.

Tuesday, December 16th at 12 PM Eastern: “High Flyin’ Dukes“: The Dukes get all up in the air when Hazzard County farmers are threatened by crop-destroying extortionists.

Wednesday, December 17th at 12 PM Eastern: “Cooter’s Girl“: A young lady comes to Hazzard County to meet her father for the first time, surprising Cooter when he’s not exactly at his best! 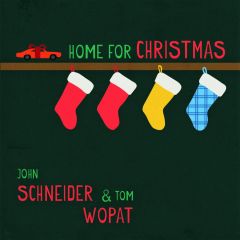 Wopat and Schneider each had a number of hits on the Country Billboard charts in the 1980’s. While both of them have enjoyed independently successful music careers, including Broadway theater roles and studio recordings, they have also performed many concerts together. Producing an album together was always talked about, but studio backing proved elusive – and self-producing would prove expensive.

Enter Kickstarter. In 2014, when the “Duke Boys” decided to make a Christmas album, they appealed to longtime Dukes of Hazzard fans for help. The goal was to raise $60,000 dollars by August 1st, with a promise that the album itself would be out in October. Not only did Wopat and Schneider meet their goal, but they went over it! The total amount raised on Kickstarter was over $73,000. On October 28, 2014, Home For Christmas was released.

The question that all fans of Tom Wopat and John Schneider have, is… just how good is the album? For answer, here is a YouTube clip of one song from the album:

Time has not softened the voices of these TV icons, Billboard chart-toppers and Broadway stars. Any fans that want to help celebrate the Home for Christmas CD release can go to the party at Joe’s Pub on Dec 2 at 9:30 p.m., located at 425 Lafayette Street in New York City. In the meantime, be sure to get The Home For Christmas album for yourself!

One-lane dirt roads
Mountains and ponds
A small town in Georgia
Surrounded by farms
Green fields, blue skies
Chores in the dawn
A well-known tavern
Full of laughter and song
Neighbors and kinfolk
Friends near and far
Legends of moonshine
And a powerful car
Escapes and chases,
The law, hot pursuit
Adventures forever
Moments of truth
Enter and welcome,
I heard you say
Be with us and smile
Join us and stay
The home that I found
Is Hazzard, forever
Among my dear cousins
Loved, cherished friends.

-Written by an anonymous "cousin"