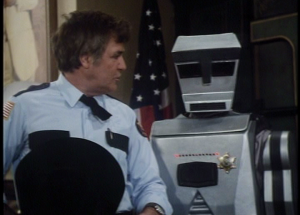 One of the most infamous episodes of The Dukes of Hazzard is “Robot P. Coltrane.” The plot: A robot takes Rosco’s place as Sheriff of Hazzard County. This episode was cringe-worthy on so many levels that we can’t begin to list them here. But the premise itself isn’t as far-fetched as we once thought.

On July 7, 2016, a 300-lb security robot at the Stanford Shopping Center in California struck a toddler and ran over the boy’s leg. 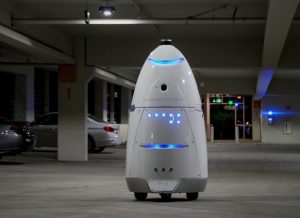 Fortunately, the child didn’t receive serious injuries, but the incident has raised serious questions about replacing human judgement and reflexes with an automated chunk of plastic.

We’re not touching the whole Dallas police robot thing, because that robot was basically a glorified remote-control unit. It was armed, yes, but it was under human control. The judgment that led to the death of the combatant was human.

Whereas the robot that plowed into the child was on its own. Perhaps it couldn’t “see” the child in its visual field, because the child was too small, and too close to the unit. Or, it may have incorrectly anticipated the child’s direction. Worst-case scenario, it perceived the child as a suspicious person and was zeroing in for a closer look.

Of course, the developers are saying this was a fluke. Their robots are safe and smart. Blah-blah. Look, it’s a robot. All you need to do to defeat this rolling menace, is shove a Hefty trash bag over its head, and it won’t be able to see a damn thing. Whup-de-doo, technology.

For cryin’ out loud, give the mall Rosco his job back.