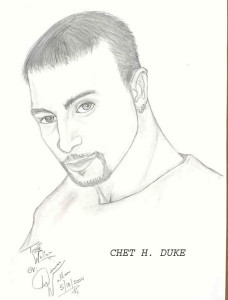 (Picture Above Left) Reg: Nowhere To Go, AKA: “Red.” This is my (Author Denise) horse, he poses as “Red,” Chet’s Thoroughbred race horse in both “Hard Tack” and “Horses In The Clouds.” He is a 10 year old (picture taken at 5yrs of age) Thoroughbred he stands 16.3 hands tall and weighs approximately 1,070LBS. (Picture Above Right) This is a sketch of Todd A. Wallan at age 26 posing as Chet H. Duke, drawn by Denise Wallan. Thank you brother, for all your inspiration and the lessons you have taught me in my life.

DRIFTING HOME: Tonight on the Dukes…. This is a long past due fic folks but here is it. This is Chet’s beginning, this is how he became who he is and why he seems to be so very much different from the other Dukes. And this is why among so many other Dukes, that Chet is a outlaw, a modern day rustler with his own original style.  [*Violence Warning.*]
Chapter 1 | Chapter 2 | Chapter 3 | Chapter 4 | Chapter 5 |

MY BEST FRIEND: Tonight on the Dukes… A story of Chet’s best friend….

HARD TACK: Tonight on the Dukes… Chet has a fight with his father, Bo, and it will take events in the past for the young son of Bo Duke to learn the error of his ways. [*Minor Violence Warning.*]

HORSES IN THE CLOUDS: Tonight on the Dukes… After a pool game at the Boars Nest turns into a brawl with his brother Breyer, Chet takes a trip into the past to test the honor, respect and dignity among him and his family. Will Chet learn the error of his ways in time to save his family and their farm….? [*This is a western, be prepared for intense shoot outs, that means a Violence Warning.*]
Chapter 1 | Chapter 2 | Chapter 3 | Chapter 4

Against the Grain – A routine traffic stop lands Rosco in some trouble, but he gets help from an unsuspecting source. *2007 Bail Bond Challenge*

One Good Turn Deserves Another – Severely wounded after a brawl at the Boar’s Nest, Chet disappears for several days. Most folks in Hazzard figure he’ll show up again but one seemingly unlikely person decides to venture out to find Chet to make sure he’s okay. 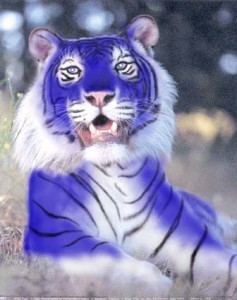 RAZOR 01: The Maltese Tiger: Tonight on the Dukes of Hazzard… Riddick is kidnapped from his home in Hazzard County and stolen away to a science lab. Will Riddick ever return to Hazzard… or will he return a changed man. [*This story is very much science fiction. Minor violence warning.*]

MICHEAL G. CARSON  “UNKNOWN BEGINNINGS“: Tonight on the Dukes… Daisy Duke finds a mysterious young man laying in a ditch on Razor Back Ridge barely clinging to life, although he survives his brush with death the young man has no idea who he is and where he came from. Find out who Micheal Carson is and how he came to Hazzard. [ *Intense Violence Warning.*]