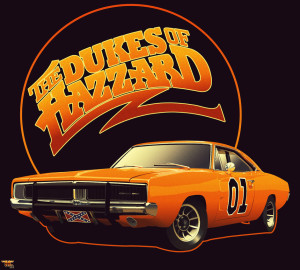 Television shows don’t get much more innocent than The Dukes of Hazzard. The heroes in Dukes didn’t carry guns; they didn’t backtalk their elders; they helped their friends and neighbors; they were kind to animals; they befriended strangers in need.

These distinctions did not save the show from the rash of political correctness raging through corporate America. During June 2015, TV Land quietly stopped airing the Dukes of Hazzard. While no official explanation was given, it’s clear the rebel flag adorning the roof of the General Lee was the reason.

The purging didn’t stop there. Barnes & Noble, Target and other retailers pulled Dukes of Hazzard DVD’s off the shelves, preventing them from being purchased. A Barnes & Noble employee told us directly that the DVD’s were being pulled and shipped back to the distribution warehouse. We can only speculate that they will be disposed of and written off as unsalable merchandise.

Amazon is still selling the series, but some seasons are getting hard to find, and resellers are marking up remaining copies far above typical price. There is speculation that Warner Bros. will not permit any further printing of Dukes of Hazzard DVD’s after the existing retail supply is exhausted.

While the majority of Americans think that picking on The Dukes of Hazzard is going too far with the purging of the rebel flag, there seems to be little hope for the future of Hazzard County.

Ben Jones continues to speak out against the pointless censorship of all things bearing the rebel battle flag, but despite his valid points, no one is listening. The assault against the flag continues unabated; it is not allowed defense. Merely allowing the flag to exist anywhere, in any form, other than a museum, is politically incorrect – and therefore disallowed.

When political correctness controls us, when censorship becomes the order of the day, when history and its monuments are erased…we become something worse than what we’re trying to hide. Today it’s a rebel flag. Soon, it will be some other symbol that holds the potential to offend. Maybe it’s a cross. Maybe it’s a sports logo. Quick, sanitize our municipal displays, change our team names and mascots…oh wait, we’re doing that already.

So where does it end?

Who decides what can be expressed, purchased, viewed? Under what conditions?